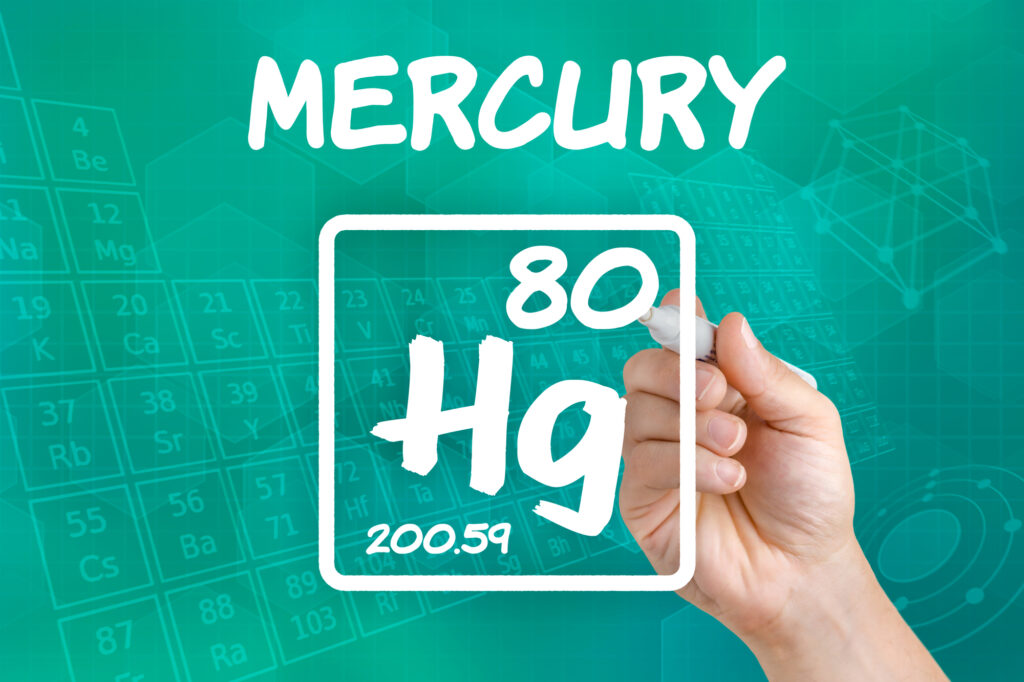 This month’s news article puts the spotlight on a common drinking water contaminant. Mercury can still be found in many water resources around the globe. Mercury in your tap water could be severely impacting on your family’s overall health!

At ZeroWater we want to provide you with answers to frequently asked questions regarding Mercury in your drinking water, as well as a solution for how to protect your family from Mercury exposure.

Safe Guard Your Family against Mercury in Your Drinking Water with the Help of ZeroWater.

Mercury – What You Need To Know: 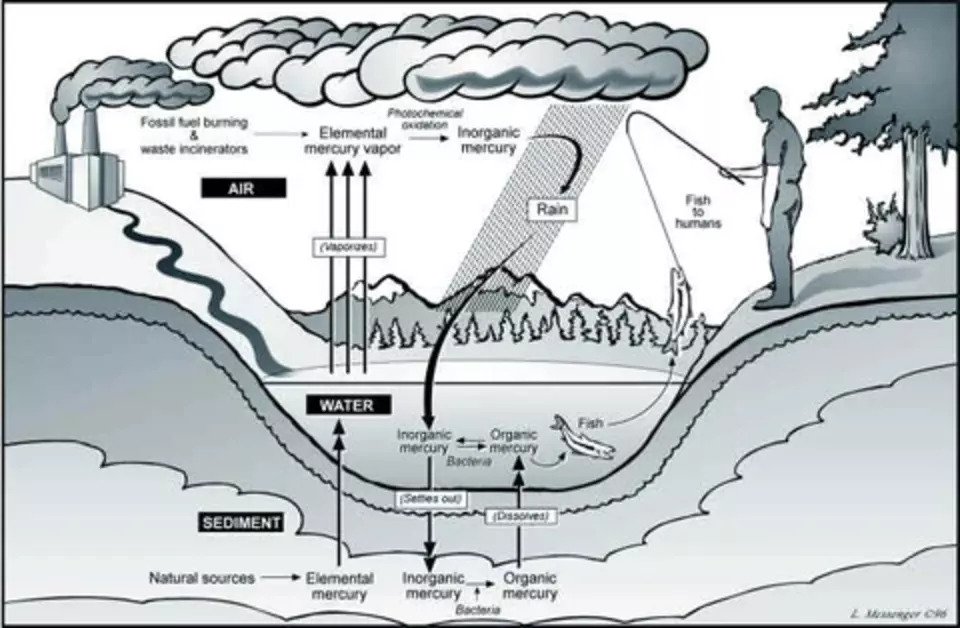 How Are We Exposed To Mercury?

Mercury is one of the most serious contaminants threatening our waters because it is a potent neurological poison in fish, wildlife, and humans. It is a global pollutant that ultimately makes its way into every aquatic ecosystem through one of two routes:

According to the U.S. Environmental Protection Agency (USEPA), emissions from coal-fired power plants are the largest source of Mercury in our atmosphere.

The main source to most aquatic environments in the U.S. and Britain is from atmospheric depositions (rain, snow, dry particles). This means that Mercury is released into our atmosphere through power plant emissions. It is then condensed into the rain water which falls to earth, contaminating the soil and bodies of water. We then access these contaminated bodies of water as the water is pumped into our pipes and flows out of our tap. When we consume water containing Mercury this can drastically threaten our health.

The bay was rich in fish and shellfish, providing the main livelihood for local residents and fishermen from other areas. For many years, no one realised that the water and fish were contaminated with Mercury, and that it was causing a strange disease in the local community and in other districts.

At least 50,000 people were affected to some extent and more than 2000 cases of Minamata disease were certified. Minamata disease peaked in the 1950s, with severe cases suffering brain damage, paralysis, incoherent speech and delirium.

What Are The Adverse Health Effects of Mercury in Our Tap Water?

Exposure to Mercury – even small amounts – may cause serious health problems, and is a huge threat to the development of the child in utero and early in life.

Mercury can be extremely poisonous, and we can absorb it by touch, inhalation, or consumption. It builds up in the body with each exposure and is very difficult to remove. If too much builds up within you, you can suffer from Mercury poisoning, which can be potentially fatal.

All forms of Mercury are toxic to humans, but Methylmercury in particular is of great concern because our bodies have a less well-developed defence mechanism against this toxin.

Foetuses are most susceptible to developmental effects due to Mercury. Methylmercury exposure in the womb can result from a mother’s consumption of contaminated fish or water. It can adversely affect a baby’s growing brain and nervous system.

The primary health effect of Methylmercury is impaired neurological development. Therefore, cognitive thinking, memory, attention, language, and fine motor visual spatial skills may be affected in children who were exposed to Methylmercury as foetuses.

Elemental and Methylmercury are toxic to the central and peripheral nervous systems. Moreover, Mercury has toxic effects on the nervous, digestive and immune systems, and on lungs, kidneys, skin and eyes. Neurological and behavioural disorders may be observed after inhalation, ingestion or dermal exposure of different Mercury compounds. Symptoms include: 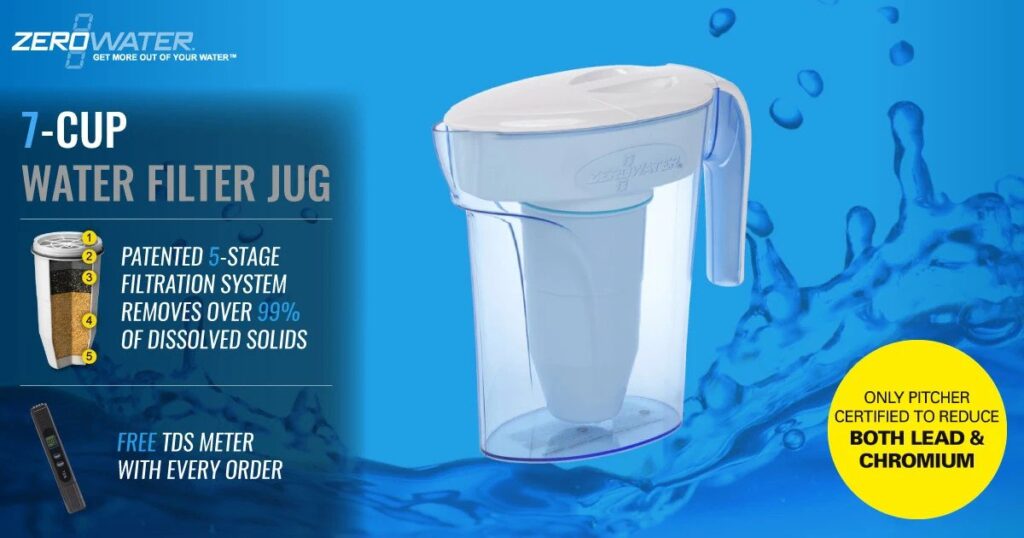 YES! When tested in accordance with the NSF’s protocol based on a 40 gallon filtration (double the rated usage), ZeroWater removes 91% of Mercury from your tap water.

How Can ZeroWater Help You Protect Your Family from Mercury & Other Dangerous Contaminants?

When tested in accordance with the NSF’s protocol based on a 40 gallon filtration (double the rated usage), ZeroWater’s Premium 5 stage water filters reduce 91% of Mercury from your tap water. Therefore, to guarantee the safety of your family against Mercury exposure and poisoning, it is in your best interest to invest in a ZeroWater water filter jug.

Moreover, our filters are also NSF Certified to remove 99.9% of Chromium, and they are third party tested to remove, 99% of Lead, 99% of Uranium, 93% of Arsenic, 99% of Copper and 95% of Chlorine, among many other contaminants.

As well as this our filters reduce plastics larger than 10 microns (0.01mm) so will catch almost all microplastics, so you and your family will not only be safer from the negative health effects of Mercury but you will also be protected from the detrimental long-term health effects caused by microplastics.

Our Premium 5-Stage Ion Exchange Water Filtration System outperformed and reduces more contaminants than any standard 2-Stage filter on the market such as Brita Filters. Therefore, it is a worthy investment to purchase the best, most effective and affordable filters on the market with ZeroWater.

At ZeroWater we want to decrease your anxiety surrounding water contaminants, reduce the risk of health problems and boost your hydration and health with filtered, purer tasting water.

To Protect Your Family from Dangerous Mercury in Your Tap Water Today, Invest in the Best Water Filter Jug on the Market with ZeroWater.